Can someone please explain to me what happened to summer? Because I don’t know where it went. One second the kids were celebrating the last day of school and the next thing I knew someone said it was September and it was time to get back to the school-day routine.

It’s not all bad, but man, I want another month of summer – more sun, more heat, more beach days! Sweaters and boots and multi-coloured leaves are great but there’s a lot more to be said for lying on the sand or swimming in the water. Ah well.

Breanna was super excited about school and seeing her friends. She fell asleep quickly but she woke up an hour earlier than she needed to, and she was all jacked up like she’s had a cup of coffee. Hayley was a little less enthused; last year she was split up from her best friends and was all alone in a split class full of people she didn’t really know that well. She did make a friend over the course of the year but it was tough and she was apprehensive about this year.

Still, both kids got up quickly and easily, eating their cereal and getting dressed with little prompting. I got Breanna’s hair into a ponytail with a flower clip and impressed myself by putting Hayley’s hair up into a pretty damn good bun, I took some pictures, and we were off. 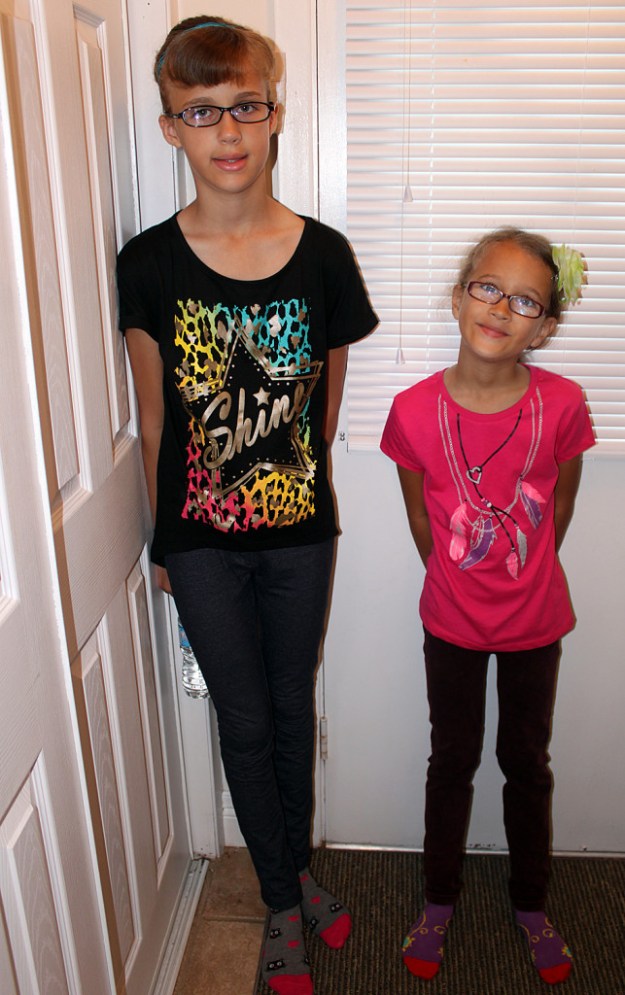 One big girl with a fake smile, one smaller girl who was ecstatic

Since I don’t start until 10 I was able to go drop them off and George took me to work afterwards. I was really happy, I would hate to have to miss that. Hayley was pretty quiet until the found out the good news – all three of her best buddies were in the same class as her. She went from her forced, phony smile to a real one, a huge one, and just like that everything was perfect for her.

One of Breanna’s best friends is in a different class but quite a few of her other good friends are in the same one. She was mildly disappointed but in the end it was no big deal, she figured she can just play with her at recess and lunch.

Overall it was a good day for them. They were happy going in and happy coming out of school. I know it can’t be perfect and all kittens and rainbow-farting unicorns every day but it’s still a good start to the year. Here’s to a great school year ahead!