Anyone who has been reading me for awhile knows that I have a huge interest in the refugee situation around the world. Every time that I do the Blogathon (a fundraiser where people blog every half hour for 24 hours straight, as crazy yet awesome as it sounds) I raise money for the United Nations High Commissioner For Refugees (UNHCR). I’ve done extensive reading on the UNHCR website and in books/articles.

When I heard that Medecins Sans Frontieres/Doctors Without Borders (MSF) was setting up a replica of a refugee camp in Jeanne Mance park in Montreal I was all over it. I wrote it on our wall calendar and announced that we were going to go because really, there was no way I could miss that.

Hayley had the day off on Friday because of a ped day so we decided that would be a good day to go; I figured that most people would be in school or at work so it wouldn’t be as busy as a weekend. It also ended up being a good choice because the rest of the weekend was very hot and humid whereas Friday was much more bearable. As I expected, I enjoyed the tour of the refugee camp – if enjoy is the right word, which it isn’t, but you know what I mean – and it was very educational. I already knew a lot of the information that was shared with our group but it’s one thing to know statistics and it’s a whole other thing to actually see it right in front of you. Even though it wasn’t a real refugee camp with real dangers, it was close enough to be humbling.

We joined a small group and met Zelda, an MSF nurse who has been on seven different missions, including Democratic Republic of Congo and Burundi, and she led us up to another MSF member who was acting as a border guard. Even though the kids were with us, no one sugarcoated anything which I liked; they were very blunt about telling us that by the time we had reached the border we had probably lost a father, a daughter, and other family members along the way. Then the guard refused to let us into his country without being paid off in bribes. In our case he took the bike helmet and purse of a woman in our group before letting us in. He told us that although she could have hers back, in the real late-night border crossings, many refugees give up whatever few possessions they might still have. 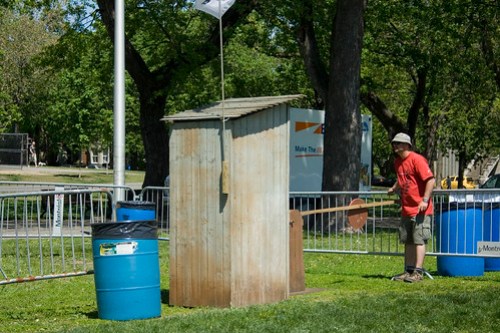 Of course we weren’t safe after crossing into a new country. If refugees can get across the border so can rebel groups and that’s when you might stumble across a land mine or two. 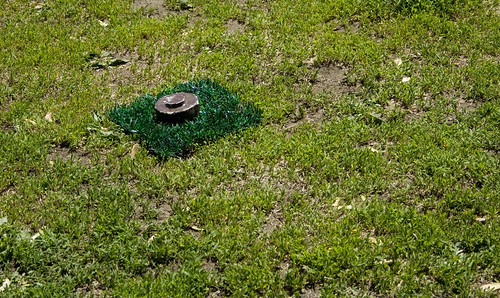 They’re unbelievably small, so it’s easy to see how you could accidentally step on one. However, and this made me have to pause and take a deep breath so I wouldn’t cry, Zelda told us that in some countries the rebels had started painting the land mines a bright yellow. Why make them noticeable instead of hiding them? Because the U.S. aid groups had been dropping food packages in bright yellow boxes so they could be easily found in the jungle. Countless children have died or been severely injured because of mistaking a yellow land mine for a yellow care package.

We were then shown some examples of the most common “housing” that refugees have when they live in a camp. Home sweet home. 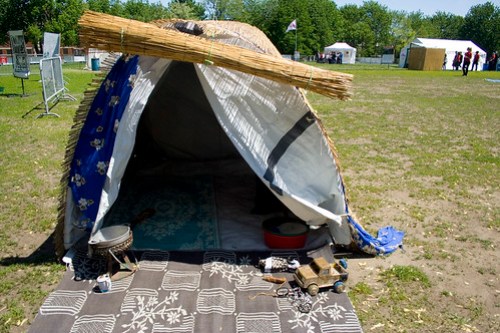 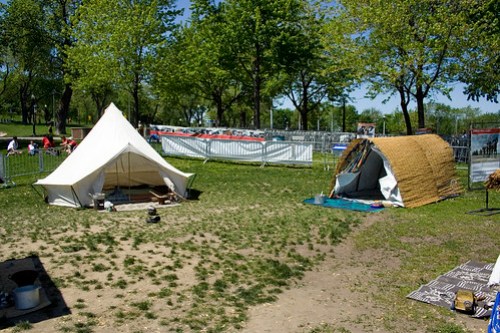 While they may not look too bad – and these ones were “good” tents, made with canvas or tarps along with the straw – there are a few things to keep in mind. For one thing, in many cases these tents might house up to 6-10 people which might require arranging to sleep in shifts since they’re not big enough for everyone at once. Also, many of us in our first world countries like to camp out in a tent for a couple of days. These refugees are living in them for great lengths of time. Some refugees have been living in these tents for years, decades, and have no end in sight.

Our guide Zelda had just returned three weeks prior from several months in Haiti. She showed us this square tent and told us it’s a very accurate representation of how people are currently living ever since the earthquake destroyed so many homes. 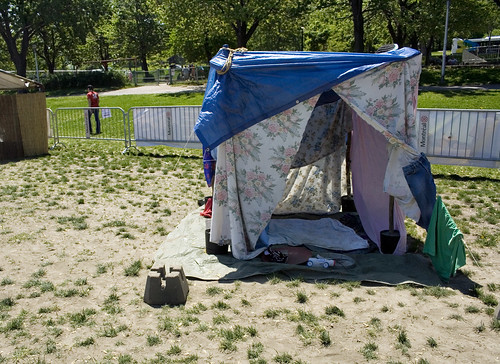 The block out front is to show us the tiny amount of space between tents. The width of the block is the width of “space” between neighbors. There’s absolutely no privacy whatsoever. Haiti is also going through its rainy season right now and she told us that while she was there the first big storm hit causing flooding (the camp she was near was on a bit of a hill so the water just streamed straight through everything) and there was a lot of lightning hitting. She said that they laid in their tents not too far away from the camp and all they could hear was people screaming all night because they were terrified. She told us that she hopes she’ll never have to go through another night like that ever again because it’s awful to hear that while being completely helpless to do anything for them.

We were also shown how to get our food and water. If MSF is responding to an emergency and haven’t fully set up yet they hand out nutrition bars – one per person per day. They’re the size of a granola bar but have all your calories for one day. I got to taste a piece and it’s not bad but it’s very dry and it’s not something you would choose to eat for long periods of time. Once MSF does get set up, this is what your daily ration of food would be. 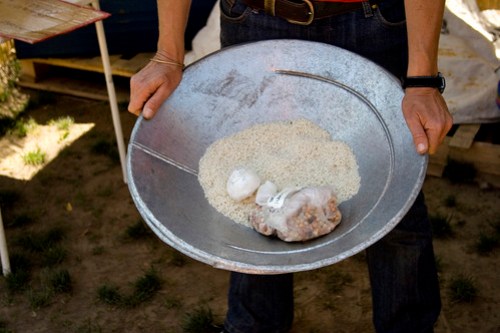 And if you’re super lucky you’ll also have enough water to cook your rice and dried beans, as well as enough firewood to cook it all. These are logistics we just don’t have to think about in our fancy kitchens. As for the water, most women (and sometimes older children) walk as far as 5 km away to fill up huge 5-gallon jugs which they then carry on their heads back to the camps. Not only is it heavy to carry such long distances in the heat, many women are at risk of being raped and/or kidnapped along the way. Because although rape is always a matter of power in these cases it’s also used as a weapon of war. Nice, right?

Aside from the land mines being painted yellow, the other moment that nearly made me burst into hysterical tears was the section where they showed us some examples of art therapy that MSF does with the children in refugee camps. There were six drawings done by children in Colombia who have grown up knowing nothing but guerrilla warfare and fear. While I tried not to cry, I told the woman standing next to me that my kids draw butterflies, rainbows, and flowers. This is what refugee kids in Colombia draw. 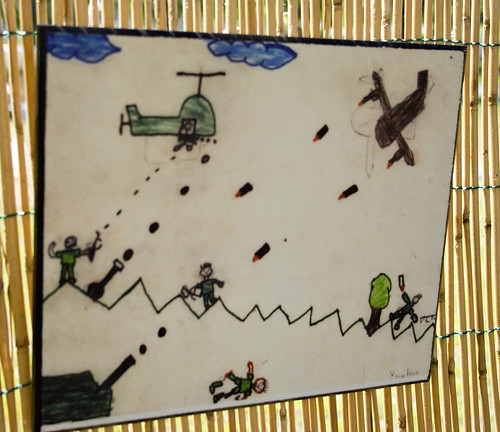 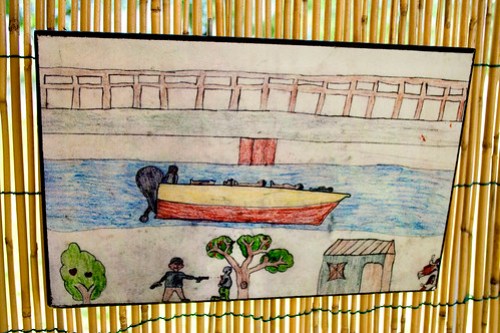 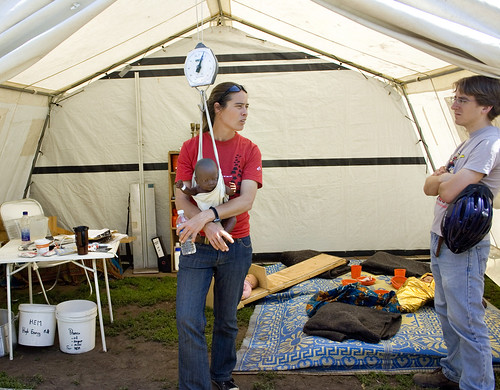 Zelda told us that out of all the places to work in a refugee camp, the malnutrition station is her favorite even though it’s difficult to see children who are so sick. She held up a card with a small hole in it and asked Breanna to try to put her arm through it; it was just a bit bigger than my thumb so of course Breanna couldn’t do it. She told us that in a refugee camp, a four-year-old just like Breanna could easily slip their arm through if they were malnourished. However, it’s a good place to work because the results are very quick to see. If the kids are brought back every day for the special food, they start to fill out and get better.

The entire experience was very somber and educational. It wasn’t a happy, fun tour. However, it was exactly what I wanted it to be. I’m not in a position to go to a war-torn third world country for 9-12 months at a time no matter how much I might want to help. I’m not going to leave my family. The next best thing is to help out in other ways and for me that includes learning as much as I can and helping to spread the awareness.

I have a few other photos over here if you’re interested in seeing them. I’m so glad that I went and would definitely go back if they do it again here next year. Meanwhile, if you want to educate yourself about the things that aren’t covered very well in the mainstream media, you can check out the MSF website and UNHCR website for a lot more information.

5 thoughts on “Being a refugee for a morning”