I remember once upon a time I updated regularly. Now I just don’t seem to find the time. It’s not that I’m so terribly busy that I can’t possibly sit down and type something, I just never seem to get around to it. I love to be able to read back and remember things that might have otherwise slipped out of my memory though, so I really need to commit to doing this more often.

This weekend has been a fairly soggy one, tons of rain yesterday and showers on and off today. It’s also been very cold compared to last week, and the dampness is hard to shake off. It’s definitely warm socks and sweaters weather. It was also apparently a weekend of rage-inducing moments.

First off there was yesterday. I was all out of contact solution, to the point that each lens was soaking in all of 2-3 drops of solution each. George was kind enough to offer to go out early to get me some since my glasses are so old that it’s uncomfortable to wear them for very long. When he came back he was beyond pissed off and at first I thought he had had a bad encounter with someone at the store but it turned out it was someone in this building, someone who lives in one of the six apartments on the third floor. Let’s put it this way; I had to actually go out into the stairwell and post this note: 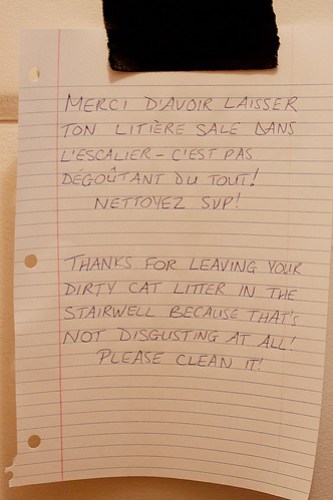 Yes, really. Someone actually had their garbage bag of dirty cat litter break as they were coming through the door to the stairs, and it fell all the way down the stairwell to the second floor. And then they left it! At first I gave them the benefit of the doubt, saying that maybe it had just happened and they had returned to their apartment to get a broom and new bag. Hours later it was evident that this was not the case. By the time George returned home from working last night he said both the note and the disgusting litter were gone so I guess my outrage worked.

In related news I am so glad that we are moving out of here in 71 more days. God. How sad is it that you need an annoyed neighbor to point out you should clean up your mess in the stairs?! The cleaning people only come once a month, it would have sat there for ages otherwise!

The other moment of rage was something I witnessed this morning. I was coming up the back stairs from the parking lot with the dog and I brought her over to the grassy courtyard when I saw some people exiting the building so she wouldn’t jump on them. Much to my disbelief I saw a father carrying a large car seat while his son who looked to be about five or six years old carrying his baby sister who is approximately eight or nine months old, give or take, based on the last time I saw his mother still pregnant. Not 20 seconds later I saw the mother come out behind them and she had nothing in her hands other than a set of keys, so it’s not like there was no adult around to carry a baby.

I stood by the door, all tense with nerves as I watched that little boy descend the seven cement steps to the parking lot and sure enough as he made it to the second to last step he suddenly disappeared from sight; he had fallen forward into the parking lot, baby in his arms. The mother screamed in horror and ran down to pick the baby up. THEN, as if it wasn’t all bad enough anyway, she started YELLING at her son as though he was some terrible child for losing his balance and falling. Hey lady, if you hadn’t expected your young kid to carry a baby this never would have happened. The baby was wailing and the father ran over to see if she was okay, and I’m hoping she’s fine since she was quite bundled up with a hat and the hood of a very puffy snowsuit, but I don’t know.

I just… I don’t know, sometimes all you can do is clench your fists and walk away.

Last weekend was much better. It was sunny and warm, and although the wind was a tad chilly we spent quite a bit of time outdoors on Saturday. Our friends invited us over for the first BBQ of the season – and with our upcoming move we have to enjoy those as much as possible – and we took the kids down to the river for a bit, then followed that up with some snacks out on the back deck in the sun. 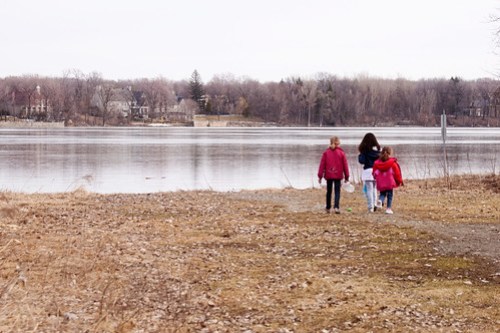 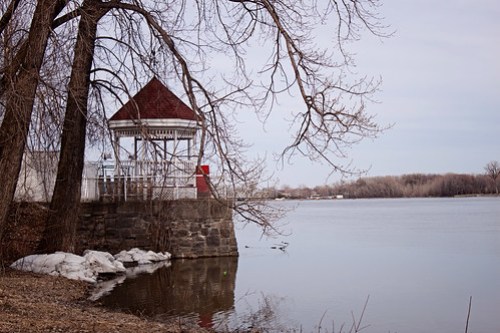 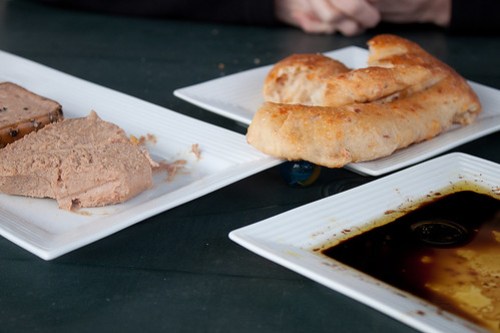 It makes up for the fact that this weekend has been primarily spent indoors. The sun is actually out now but it’s still cold and damp, and the wind is really going to town out there. Ah well, the grass is turning green pretty quickly so I guess it’s a decent trade-off. Here’s hoping that the long Easter weekend will be nice though!

In unrelated news, last night George and I were watching Rush Hour 2 on YTV or Teletoon, or one of those kids’ channels that plays more PG + movies later at night. During one of the commercial breaks they had one of the channel regulars talking about… something to do with the movie I think. I didn’t listen at all because I nearly choked on my chips in my geeky excitement when I saw he was wearing that said, “There are four lights.”

I hacked and coughed over my food and waved my hand wildly at the TV and choked out that I LOVED his shirt. Confused, George looked at me and asked why and what did it mean. Aghast, I told him it was from the 2-part episode of Star Trek:TNG when the Cardassians kidnap Picard and torture him, trying to make him admit there were three lights on the wall when in reality there were four. Anyone who was a fan of that show (hi, like me apparently) has always loved the moment at the end when the crew rescues Picard who had been very close to breaking and confirming the three lights; as he’s being helped out of the room he turns and snarls, “There. Are. FOUR. Lights!” 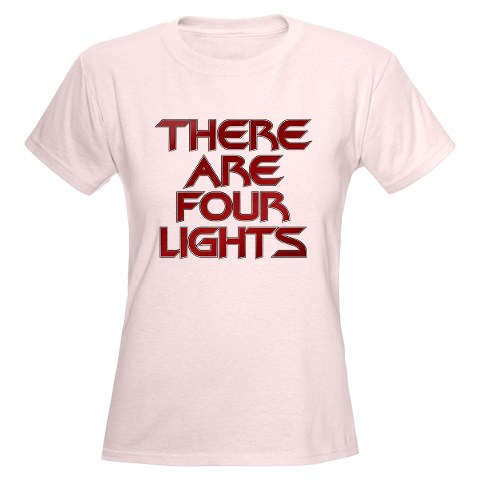 I just shook my head in sorrow that George had no recollection of this episode and didn’t realize the magnitude of such a shirt or why I would have a sudden burning need to find one of my own. Meanwhile I think George also shook his head in sorrow while wondering how on earth he had ever managed to get stuck with such an insufferable Trek geek.

We all have our cross to bear.

2 thoughts on “Catching up”