Christmas was very different this year in many ways. We missed our families back home as well as our friends. The up side was that we had no running around to do and got to spend Christmas at home, just enjoying gifts and the day. We also had our very first turkey dinner that we did ourselves. 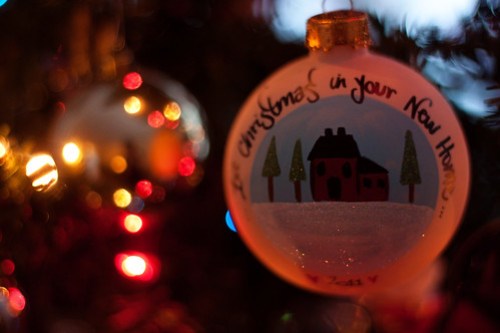 On Christmas eve the kids had their bath and popped into their traditional Christmas eve pajamas (I have no pictures but they wore them most of Christmas day anyway so I have plenty of pictures after the fact!). Some family dropped by briefly for a nice Christmas eve drink and the kids were so happy to see their cousin for a bit. Then we set out treats for Santa and his reindeer before I shooed them off to bed with a reminder of where Santa was on the NORAD tracker (I believe he was off the coast of South America at the time!). 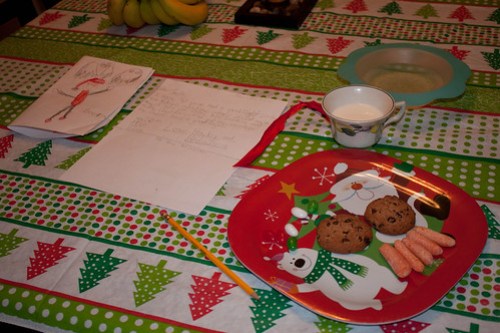 I had finally finished wrapping so we got everything stashed under the tree with the stockings waiting for Santa and then George and I headed off to get some sleep ourselves.

In the morning I re-enacted a tradition from my own Christmas mornings; every year my sister and I would wake up at my grandmother’s house and we’d have to wait in bed, craning our ears to listen for the sound we needed to signal it was time to wake up. The house would be cold so my grandmother would get up, turn the heat up, and start a fire in the wood stove in the kitchen. Once it was suitably warmed up, she would turn on the radio, blasting Christmas carols. At that point we’d pop up and wake everyone else up. I made the kids wait for the same here, coming down to plug in the portable electric heater, boil water for coffee, and make sure my camera was ready. Once I was set up, I turned on the Galaxie station on the television that was playing round-the-clock Christmas music and they came tearing down the stairs.

They weren’t impressed with the wait, but I told them at least they didn’t have to go through what my sister and I always did, where we’d run down and then have to stare down our other grandmother who insisted on eating a bowl of Rice Krispies before heading to the living room! 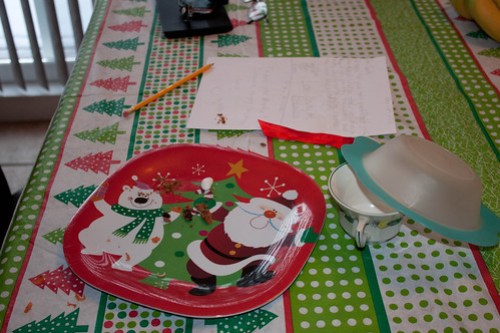 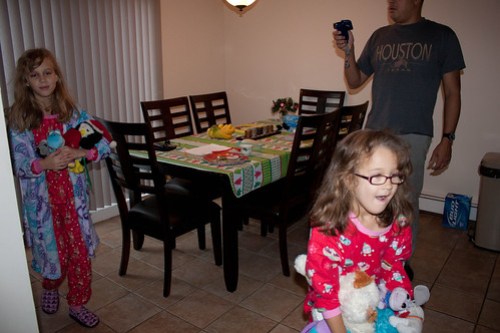 Another thing that reminded me of being a kid was the pile of presents under the tree. Growing up there were the two of us as kids, our parents, and our grandmothers, so there was an insane amount of stuff. This year everything had been sent out here by our families so we had everyone’s stuff under the tree at once. It was nuts. 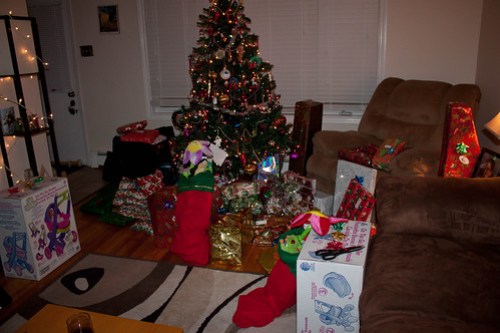 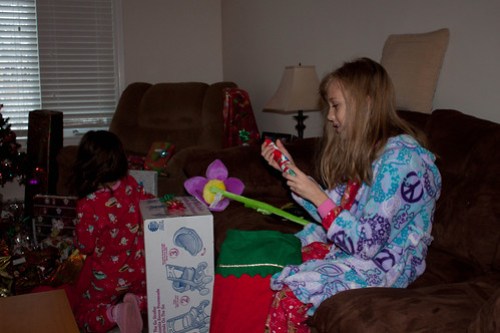 Everyone got great gifts. George and I got some nice clothes from our families, and the kids got some cute outfits too. The presents the kids got all went over very well. Most notably, Santa brought Hayley the baby elephant she desperately wanted and Breanna was thrilled that he brought her the art set complete with easel, canvas, palette, and paint brushes that she had asked for. 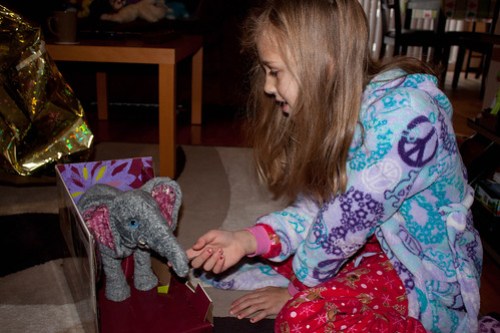 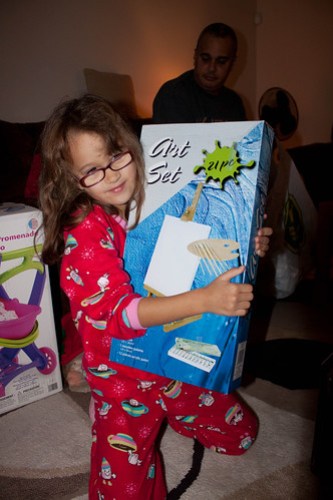 They got other fun stuff too, including Bendaroos, cozy blankets, a Wii (ours died in the move), and an awesome live-action table top Angry Birds game. However, their “big” gifts from us went over best of all. 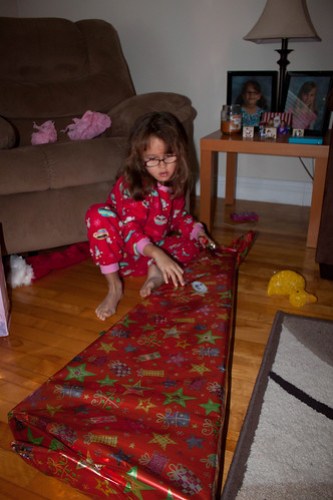 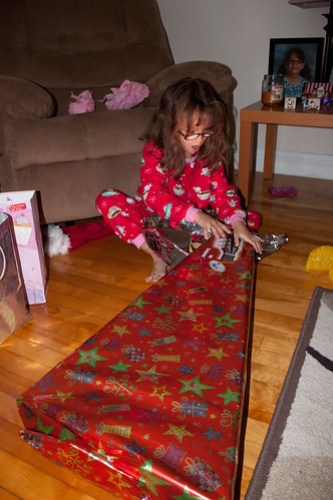 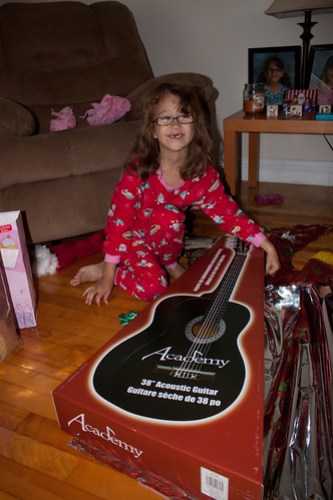 And Hayley, in keeping with her lessons at school, got this: 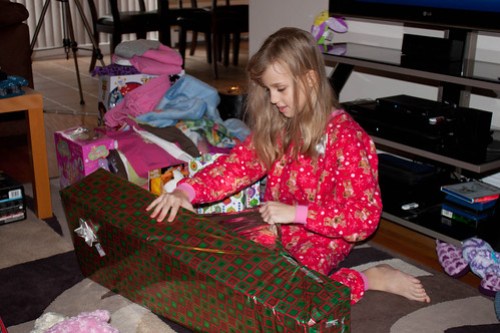 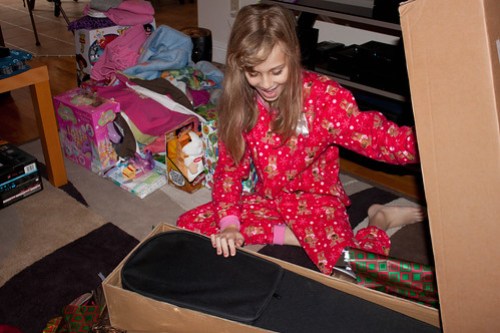 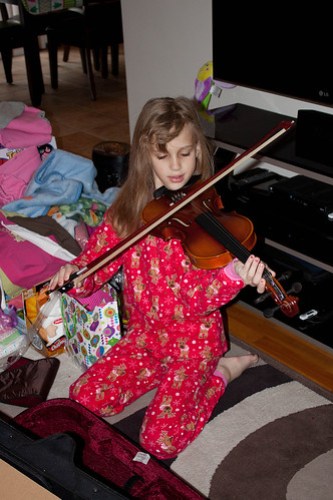 Both were noisily ecstatic.

After an afternoon of them playing with their various toys, George and I set out our first big holiday dinner. I give George full credit for the turkey. All I did was baste it, he prepped it all, courtesy of his mom’s tips. It was DELICIOUS. Once it was just about ready I made the mashed potatoes, sweet potatoes, extra stuffing, green & yellow beans, carrots, and gravy (whew, never made so many sides all at once!). It was such a great meal, and we followed it up with warm apple pie for dessert. 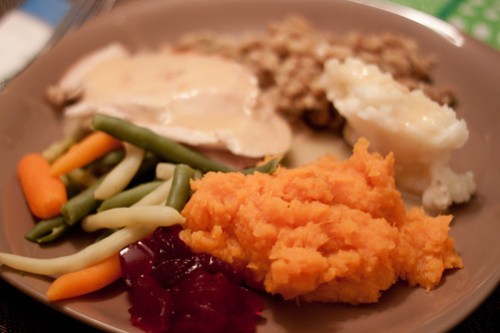 Before eating, we put our plates on the table and George called his parents and put the receiver on speaker phone. He then asked his dad to say grace, as he always has before a holiday meal. I must confess, I was glad that I closed my eyes because I felt them filling up almost immediately. Like I said, it was great but I really missed our families.

Eventually we got the kids into bed and George and I finally indulged in our very favourite Christmas tradition of all – our habit of watching the most non-festive movie we can possibly find. This year we watched World of Zombies: The Zombie Diaries and it was full of good old fashioned undead fun.

On the 26th we started over again when my sister, my brother-in-law, his parents, and of course my niece all showed up for dinner and present exchanging. George served up his curried beef and we also had leftover turkey and all the fixin’s for anyone who isn’t a fan of spicy food. 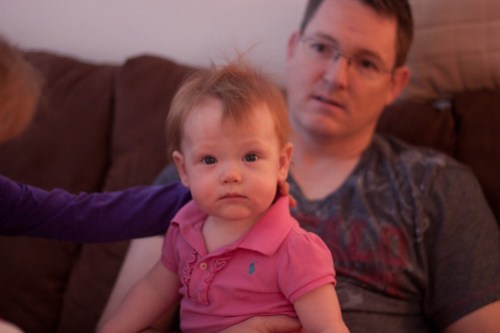 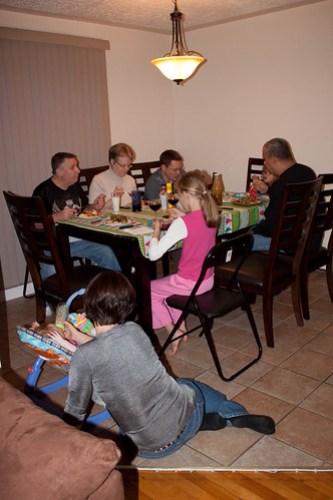 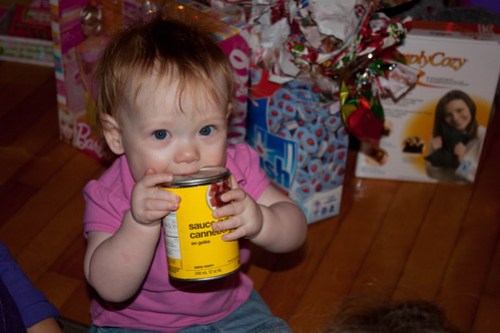 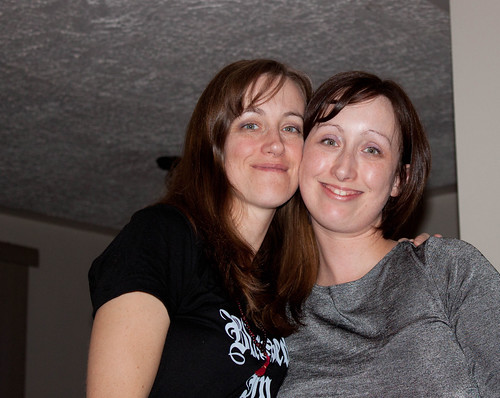 I was very happy because they got me a set of hand weights and a Magic Bag, just what I had suggested when Amanda asked me for ideas. The kids each got a Barbie set too, and they spent most of today playing with them (and mostly playing well, to boot!)

Today was low-key. The kids, as I said, played Barbies and then played on the Wii. George worked on some music, and I caught up on my sadly-neglected yoga. We also ended up with a surprise when the doorbell rang and one of our friends was at the door with a bag containing two fresh (i.e. live, wiggling) lobsters. Well, that solved the “what should we eat for supper?” dilemma! 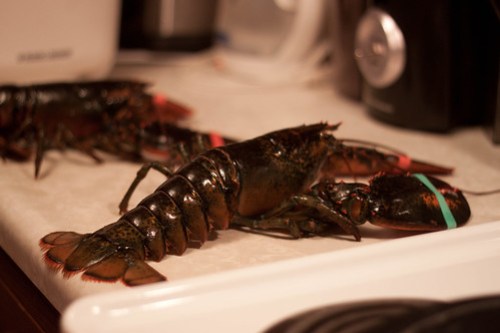 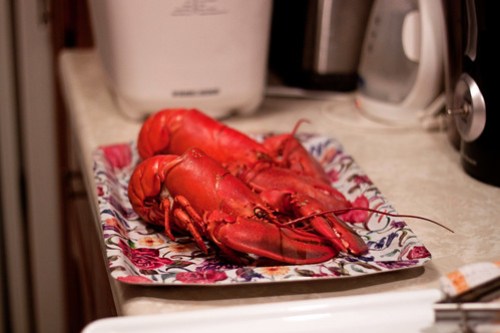 I’m now waiting for the over-stimulated and possibly over-sugared kids to fall asleep so George and I can relax on my last evening home before I have to go back to work. As much as I like my job I do wish I had more time to enjoy being home, but I only have three days to go before a three-day weekend for the new year, so it’s really not so bad. 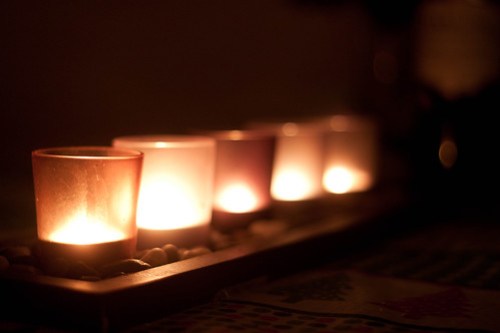 I hope everyone had a very Merry Christmas, I know we sure did! 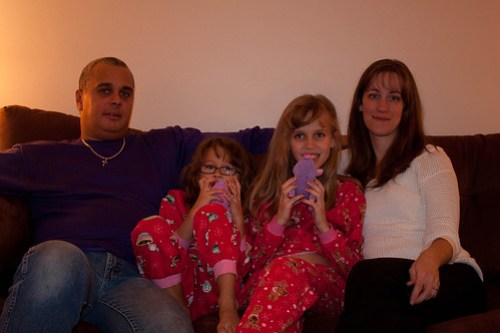 (You can see all the Christmas photos over here!)

2 thoughts on “First Christmas in Halifax”