Last week Hayley and Breanna went back to school, although to be fair they didn’t actually have a back to school week so much as a back to school Wednesday-Thursday-Friday. Monday was Labour day, Tuesday the teachers went back on their own to finalize getting their classrooms ready, and then the kids descended upon the school on Wednesday. While I’m sure that not all of them were thrilled, most seemed really happy to be back to see their friends again.

(Most of the parents looked pretty damn happy!)

Both kids were up fairly easily and got dressed quickly which is good for parents who have to get that First Day shot like I do! 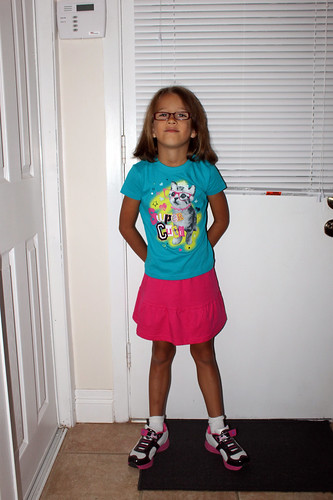 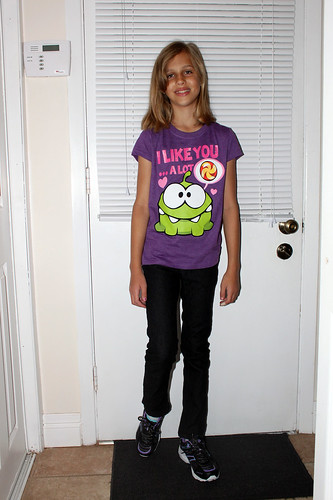 I got permission from my very awesome manager who understands work-life balance to come in late. That way I got to do the drop off for the first day and since I got to work half an hour later than I should have, I only had to start half an hour early on Friday to make up for it.

George took Hayley to her end of the school to the big gym, while I went with Breanna to the smaller gym. They get all the kids gathered up and the teachers come in and call out their class lists. Breanna was ecstatic to see her groups of best buddies and was even happier to find out they were all in the same class. As a bonus she also got the teacher she was hoping for.

Poor Hayley was not so fortunate. She was so disappointed to find out that she is not in the same class as her two best friends, and of course when you’re almost 10 years old, being separated from your friends is almost the end of the world. On top of that, she didn’t get the teacher she really wanted to have, and they put her into a split class. She was really upset and didn’t have a great first day; she sounded very low when I spoke to her on the phone, and I had to give her quite the pep talk when I got home.

Day two was better though. I had explained how I had been in a split class in elementary school too and that it was a bit weird at first but isn’t bad at all and that she’ll be fine. I also pointed out that she’s not meant to be hanging out and socializing with her friends during class time; she’ll have a chance to play with them at recess and lunch, and she’ll see one of the two once violin starts back up again. Besides, they both live close by so they can get together on the weekend (and indeed, we had her #1 best friend over after school on Friday and she went to her house today). By the time she came home from school on the second day she was much more optimistic and seemed pretty happy. She also told me that she really likes her teacher and from what I’ve heard so far she sounds like the perfect teacher for keeping Hayley engaged in class.

One cute aside: Hayley’s best friend was also very disappointed that they weren’t in the same class. When she went home she got her mother’s permission to email the vice-principal to ask her to please consider putting them together in the same class again. It was the sweetest thing. I told Hayley that she should not get her hopes up but that it was a sign of a very good friend, and that it takes guts to do that.

As a sign of how nice and understanding the vice-principal is, she brought all three girls outside a few minutes before lunch to speak to them. She was very empathetic but also gently explained that they could and would not be moving Hayley over to another class and she went on to reiterate what I had said about how they could see each other at recess and lunch. They were still a little bummed that they were not all in one class together but I think they were really pleased to have her take their request seriously and to actually discuss it with them instead of just blowing it off like someone else might have.

By the end of the short week they kids were both feeling pretty settled and were back in their routines. Clearly three days of school after a full summer vacation is exhausting though, as they both fell asleep quickly and easily each night. 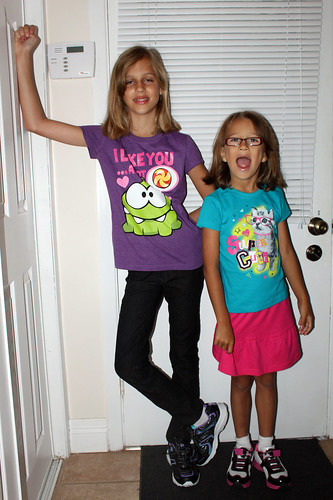 Hopefully it will continue for the rest of the school year!

3 thoughts on “First week of school under their belts”