(And not necessarily the good kind of excitement either.)

We enjoyed a three day weekend here thanks to Remembrance Day falling on a Sunday, and we decided to spend our weekend doing as little as humanly possible. We achieved this quite nicely for the first two days. We didn’t really go anywhere, other than the kids who went for a play date and we watched a few movies. Speaking of movies, I mentioned that I felt like watching a zombie movie and suggested re-watching “28 Days Later” since I’m more into the zombie culture than I was when we first watched it. George countered that he felt like watching something new but tried to appease my desire to watch a particular genre by putting on “Abraham Lincoln vs Zombies” instead. I just… Good lord. I mean it was hilarious in the sense that it was completely stupid and at least it didn’t try to pass itself off as being a good movie by any means but I certainly don’t recommend it to anyone. Jeesh.

(We watched “28 Days Later” the next day, thankyouverymuch. And then we watched The Walking Dead which was awesome.)

However, our weekend of slack-itude came to an abrupt halt. Breanna went to bed feeling seemingly fine and then woke up exhibiting a noise I had never heard personally but recognized immediately anyway; she sounded exactly like a barking seal and I said to George, “well that sounds like croup.”

The plan was to just have her take it easy today and instead of sending her to school, George would take her to the clinic in the morning. That went out the window pretty quickly. George was working on some music and talking to his friend on Skype, Hayley was playing a game on the computer downstairs, and Breanna and I were in the living room. I was doing some video editing on my laptop and Breanna was watching an episode of “Teenage Mutant Ninja Turtles” when she started displaying signs of really rattly breath noises. She started complaining that she couldn’t breathe and got really upset about it, which only made it worse.

While I figured it was most likely just that she was scared by how hard it was to breathe and not actually that she was going to literally stop being able to breathe, I’m not a doctor and neither is Google, no matter how hard it tries. I told George what was going on and he immediately popped her in the car to take her to the clinic.

Alas, the clinic was closed and so off the the emergency room they went. Good times! I wanted George to come pick me up so I could be there too but we didn’t want Hayley to have to sit around and maybe catch something herself so I stayed home with her and tried to distract myself with Facebook, filming a yoga video, giving Hayley a bath, and doing a bit of housework. It sort of worked, but mostly I just wanted to know what was going on. Luckily, although George couldn’t call me on his phone he could text and he kept me updated. He even sent a picture for me after I texted a picture of myself waving at Breanna. 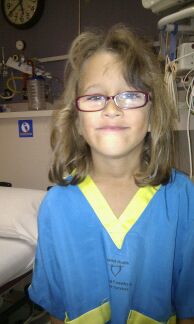 In all, they weren’t gone all that long, just about three hours give or take, and then they were done. Breanna was diagnosed with croup, which shows that sometimes I know what I’m talking about. They gave her a dose of liquid steroids which should last about 36 hours and will help keep her airways as clear as possible. Meanwhile, the croup itself should clear up in 2-3 days which is good.

It was recommended that we could bundle her up and take her outside to breathe in cold air if needed but the thing is it’s just not that cold here. It’s completely unseasonable so even though it’s mid-November it’s currently 12C at 11 pm. That’s crazy, but as nice as it is, it’s just not helpful for someone with croup. We’re having her sleep down in the basement tonight which is the coolest part of the house to see if that helps her to sleep through the night.

Croup sucks and so does visiting the emergency room (and ditto for being stuck at home while your child is at the emergency room!), but at least it’s not life-threatening and she should be as good as new in a couple of days. Whew.

I hope everyone else had a nice and hospital-free weekend!