Ever since starting to work I’ve been finding it just about impossible to fit in the amount of yoga that I used to do. Back in the not-so-distant past I would usually do it in the evening after getting the kids off to bed and it wasn’t unusual for me to do a full hour. These days I get home too late to get started with a yoga routine (although I sometimes do a quick before-bed gentle routine right in bed) and I don’t really have the time to do an hour every morning because I’m busy tidying up the house and getting ready for work. 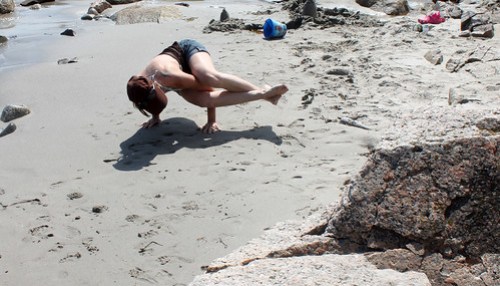 However, if I convince myself that no, I really don’t need to wash my hair today (my hair is pretty dry, it’s really only necessary to wash it every second day) and that I can just hop in and out of the shower then I can find the time to get in 20 minutes or even half an hour. The time that I don’t have to devote to blowdrying my stupidly thick and overly long hair is time that I can devote to getting my Om on instead.

This morning I was showered, dressed in yoga gear, and back down in the living room by 9:30 and I generally don’t eat my breakfast until 10 (otherwise I’d be starving by the time I actually get to work!). That gave me half an hour to roll out my mat and run through some routines. I did a round of Sun Salutations, a balance sequence, a de-stressing routine, and topped it off with a strength building routine. The only thing I forgot to do – and I just remembered now – was to end it all with a Savasana but maybe I’ll throw one in before I get changed into work clothes.

I’ve had to let a lot of things slide since starting my job but this is one of those things that I just can’t ignore. I did let too many days pass without yoga at first and the side effects of that were quick and obvious. My legs started aching, as did my hips. The latter is probably due to sitting. My shoulders began tightening up because of my unintentional hunching (I try to catch myself doing it and straighten back up) and then not opening them up with yoga. The biggest thing was feeling a sense of anxiety start to creep back in and that was definitely what kicked me in the ass to get me back on track again.

I may not be able to do an hour a day six days a week anymore but I can do what I can during the week and then do something longer and more intense on the weekends. It’s important enough to me and to my overall well-being that I can’t afford not doing it. As long as I can carve out even five or ten minutes and do something most days I’ll be fine.