This year, one of the gifts that we gave the kids for Christmas was a big Barbie furniture set. It came with furnishings for a bedroom, bathroom, kitchen, and living room. While Hayley had once mentioned wanting the Barbie Pink 3-Story Dream Townhouse

(and oh my hell, it’s way cheaper in the stores here, wow!), we figured we just gave them the Diamond Castle last Christmas.

On the other hand, it was a lot of furniture and bits and pieces that would have been just lying around in a box. The castle already had a bit of furniture so it didn’t really have room for much more. I had to clean up the kids’ room a bit anyway so I looked around, scratched my head, curse a bit, and then I had an idea.

There was a white bookshelf in there that wasn’t really serving a highly important purpose; there’s a brown shelf in there that holds a ton of books, but the white one just held odds and ends which could find new homes. I pulled it out of the corner, did a bit of re-arranging, and set the furniture up inside. 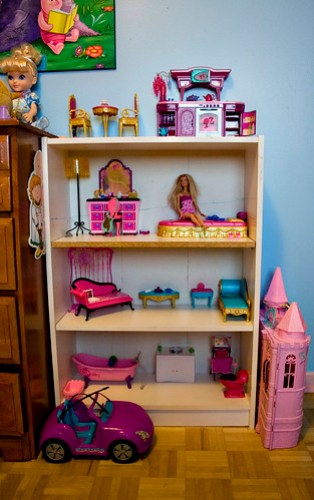 Hayley was out when I did it, although Breanna saw some of it while I set it all up. When Hayley came home her eyes bugged out of her head because she was so excited that I made her a Barbie house.

The townhouse is certainly very nice and maybe we’ll get it some day but making one for them was way more fun and they both love it. I’m already thinking that I might like to get some wrapping paper to use as wallpaper, as well as some pictures to use as window views.

When I was a kid I played with Barbies. When I hit the early teen years I didn’t really play with them so much as I loved to set up houses for them at my grandmother’s place, using random things as furniture and whatnot. Apparently I haven’t really changed all that much after all these years.

6 thoughts on “One of my creative moments”