Recently a friend of ours sent George home from band practice with a ziploc bag of venison in sausage format. I am a HUGE deer meat fan. Growing up, my dad and I used to go camping next to a beautiful lake and we’d celebrate our first day by starting up a campfire and he would cook two venison steaks in a pan right there. It was so good. I have also inhaled a great deal of venison burgers. I had never had the sausages though and was intrigued.

That first night George grilled up four on the BBQ to go with some chicken that we were having. The sausages were SO GOOD and I sang their praises so highly that our friend brought us another care package. Last night I decided that while it was tasty on the grill, I really wanted to try something different so I threw this together and it was just delicious. 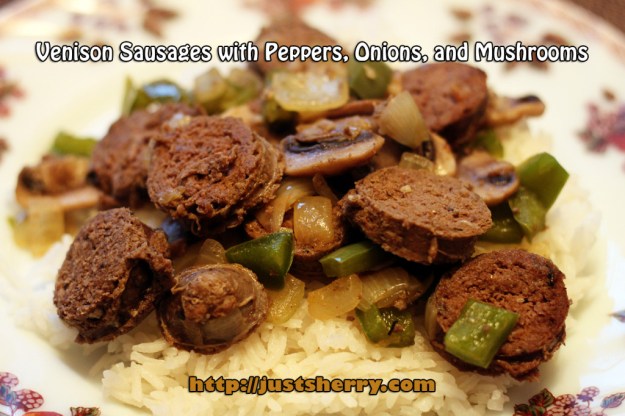 Deer meat is very lean; there’s very little fat. Unlike the meat you buy in your average grocery store, there are also no antibiotics. It’s just straight up lean, clean meat. The sausages had been seasoned already so I didn’t have to add much in the way of flavouring. Depending on who prepares your sausages and what they use, you may want to add whatever seasonings you enjoy. (And it should go without saying but of course you can use any other type of sausage you happen to have if you don’t have venison handy or if you prefer not to eat it!)

Boil sausages for about 15-20 minutes. While they’re boiling, chop your peppers, mushrooms, and onions. Remove sausages from water and slice. Heat some oil in a large skillet and add the peppers, mushrooms, and onions. Cook until they soften and onions start to brown, about 5 minutes. Add sausages and stir well. Crush fresh garlic and add directly to pan (if you don’t have a garlic press you can also finely chop it and add it to the pan with everything else. Then buy yourself a garlic press because they are AWESOME!).

Because there isn’t a lot of fat in the meat I added about 1/4 of a cup of water, maybe a bit less, in increments just to keep it from drying out and sticking to the pan. Once it’s all heated through and well mixed, reduce heat to low and cover until you’re ready to eat.

We had ours served on rice but would probably go nicely with potatoes as well. It doesn’t really make its own gravy (again, due to the lack of fat) but I still didn’t find it to be dry at all. It was fragrant and delicious and extremely satisfying. It’s definitely a meal I’m going to revisit in the future.

Do you enjoy wild game or are you more likely to stick to the standard meat that you can get in any grocery store?

2 thoughts on “Recipe: Venison Sausage with peppers, onions, and mushrooms”