Sometimes I really like planning things out and knowing what I’m doing over the next several days. For instance, I like knowing that on Wednesday and Thursday morning I’ll be at the school to volunteer for Breakfast Club, Wednesday evening I’ll be back at the school for a PPO meeting, and that Friday I’ll be going to check out a replica of a refugee camp that’s being set up in a big park by Doctors Without Borders. Throwing in some sort of event into the middle of all that could potentially throw a monkey wrench into my life. It’s not that I’m a control freak, I just like knowing what to expect and think that my anxiety issues are at least part of the reason for that. Let’s put it this way: The worst thing in the world anyone could do for me would be to throw me a surprise party. People with anxiety issues don’t need surprises, thanks.

However, all of that being said, life would be very rigid and dull if you never did anything spontaneous and so this weekend we had two totally impromptu outings. On Saturday I knew Hayley already had plans and George was going to be busy as well. The weather was calling for a lot of rain on and off all day so going to the park didn’t seem to be very likely but I wanted to have something fun for Breanna to do. Out of nowhere I decided that I should take her to the library since she had never been. I had to get a new card since I lost mine over two years ago (yes, it had been a long time since I had gone). Breanna was actually old enough to get her own card as well so she was really happy; she even got to sign her own name on the back.

She loved the library and was really good, even remembering to whisper or talk quietly. She thought it was cool that I could find specific books for her on the computer and then find them on the shelves. She requested some Caillou books and I suggested a few Dr. Seuss books as well (I confess that I like when the kids get those because I just really love reading them out loud), then she picked the rest of her haul based on what looked good to her. Who says you can’t judge a book by its cover?

We left with 12 books for her and 5 for me. We can each take a maximum of 15 but that was plenty for now. 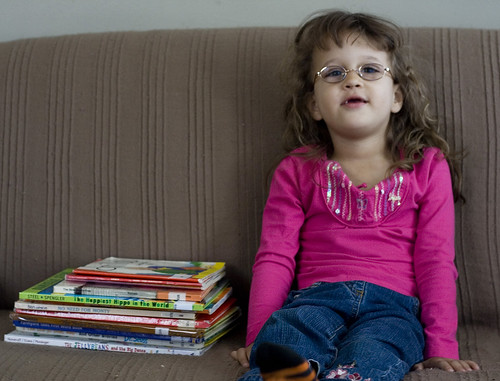 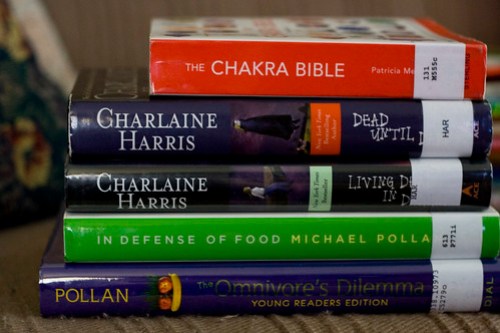 (No, I’ve never read any of the Sookie Stackhouse books, so I’m giving them a try now.)

Our second unexpected outing was on Sunday evening after supper. I had given Hayley her bath and washed her hair in the late afternoon because I thought that maybe we’d go outside to play with some bubble toys in the evening. However, after taking the dog down for a quick pee, George pulled me aside and asked what I thought about taking the kids out for some ice cream. It was really warm on Sunday and somehow it seemed like the perfect way to end the weekend so off we went.

We tried one ice cream place and the line was so ridiculous that I’m not sure we would have actually been served until well after bed time so we left immediately. Next we tried a Dairy Queen nearby but it was pretty packed too and there was nowhere to park; their parking lot is very small and there’s no parking on the street so it wasn’t looking good. Luckily there’s another Dairy Queen not too far away that isn’t usually all that busy even on the hottest days of summer, so we headed over there and had no trouble at all. 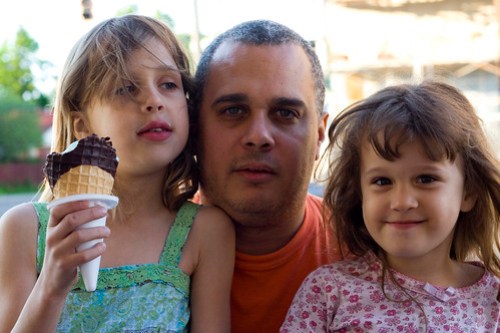 Hayley surprised me by choosing pistachio ice cream (and she loved it), and requested that ginormous waffle cone with chocolate. Of course it was huge and she wasn’t able to finish it all but she enjoyed it! Meanwhile Breanna had really wanted banana ice cream which they didn’t have. She was disappointed but the cashier saved the day by suggesting some vanilla soft serve with some banana-flavored syrup on top – perfect and she loved it. 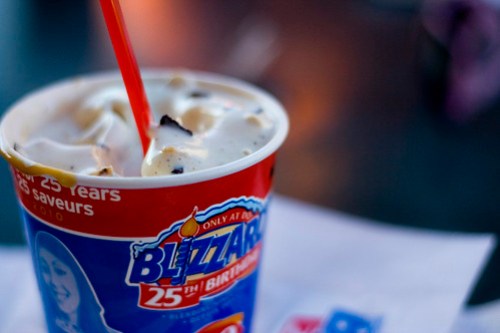 I stuck with a Blizzard, trying out their new waffle-caramel flavor. It was pretty good and had chocolate pieces in it as well, but I’m still hoping they’ll bring back their midnight truffle flavor from last year because that is seriously awesome. As always I couldn’t finish it even though I took the smallest size; they need a “smaller than small” size! George wasn’t in the mood for ice cream himself so he just got a grape slush which was good since the ice cream made the kids thirsty!

We dropped in on his parents for a short visit on the way home and I ran down to the basement to watch the last ten minutes of the first period of Montreal vs. Philly with George’s dad and, well… that was a truly awful game. I didn’t even watch it all once we got home, choosing the finale of Survivor instead. Here’s hoping we have a better game on Tuesday night!

We managed to get home before bedtime and got the kids quickly changed and off to bed. Breanna was exhausted and fell asleep quickly but Hayley listened to the game on her radio for awhile before finally giving in and drifting off.

Game trauma aside, it was a really good weekend and while I’ll stick to making plans for most things, I do love the spontaneous moments too. I hope your weekend was great too!