This time last week I was looking forward to the afternoon. Every year the school invites parents who have volunteered in some way to come up for a special volunteer assembly and tea. I’ve written about it before, but basically they send home invitations to all the volunteers and then we show up about 45 minutes before dismissal. The kids all come into the gym for an assembly to thank us for what we’ve done.

This year some of the older kids had prepared short speeches, which was cute, and then one of the classes sand a song for us. After that the principal called out for each volunteer to come up and receive a certificate and a gift, which was a school pen and a pretty notebook. She had asked all the kids to hold off on their applause until everyone had come up and we’d all get a big round of cheering at the end. Still, kids are kids and they get excited easily so some people still got some clapping, including me. I was a little surprised that there was such a loud cheer for me; I must do a good job of hiding that I’m not a morning person when I volunteer for Breakfast Club, or maybe I was just that good at face painting back at Winter Carnival.

After the assembly Hayley scooted off to daycare which is a special treat for her since she doesn’t normally get to go. However, any kids with a parent at the volunteer tea gets to go to daycare that day and she loves it so much that I usually have to practically drag her out when it’s time to go home. 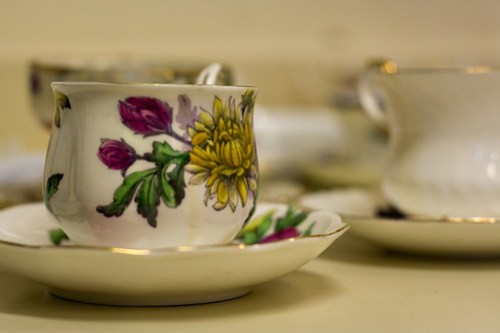 Meanwhile I got to enjoy some nice tea in beautiful china tea cups and stuff my face with delicious treats like sandwiches, mini quiche, and lots of baked goodies. I had a cup of a really amazing honey-ginger herbal tea and it was so tasty that I want to get some for myself.

I don’t volunteer at the school for any kind of reward but it really is nice to be recognized. In the past I’ve only ever volunteered to help out on field trips but this year I’ve done a lot more around the school. I joined the Governing Board and the PPO, went to the Terry Fox run (though that’s not really volunteering, but the kids enjoy it), took the grade one and two kids to see an environmental play, served pizza on pizza day once, helped with fundraisers, joined the Breakfast Club by volunteering two mornings per week, helped out at Carnival, helped with Movie Night, and will be taking part in the annual Play Day the last week of school. A lot of it required me to step out of my comfort zone and I’m so glad I did because I really enjoyed the hell out of this school year. I love knowing so many of the teachers and other parents as well as the kids, and I love that they know who I am too.

I can’t believe school finishes in just eight more days (not counting weekends and a ped day), on June 23rd. The year really flew by and while I’ll be glad for a two month (and change) break from early mornings, monthly meetings, and other obligations, I’m also looking forward to what next year will bring!

4 thoughts on “Time for tea”