Good lord. What a day. I (apparently foolishly!) believed that I’d be okay for getting to work and back today because of my shift and the fact that I don’t travel during rush hour. HAHAHA. Yeah right. It didn’t look so bad when I left for work this morning when I snapped this photo. 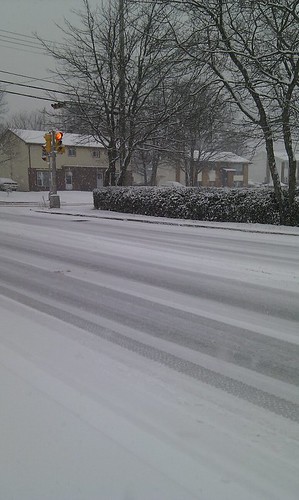 Except I then proceeded to wait for over 40 minutes for a bus that should have been there five minutes after I arrived at my bus stop. Then we had such slippery conditions that we essentially slid all the way down a steep hill (which was as terrifying as it sounds and I think it’s a strong testament to my commitment to my job that I didn’t immediately get off and take the other bus back home) and the driving was very slow from there on out. They also ended up closing streets and re-routing bus lines so that in the end what should normally be a 40-minute commute from my front door to the office ended up taking almost two hours. I was 20 minutes late but I wasn’t the only one so it was no big deal.

I was glad to be at work because we had a big company event this afternoon, however leaving work ended up being no better than trying to get there this morning. I walked with a co-worker to the bus terminal where we waited for one of our two buses and none ever came. A friendly bus driver on a different route offered his bus to the two of us and four other people waiting so that we could get out of the cold until his shift started. We all sat on the bus chatting (yes, we’re Maritimers, all sitting around talking to total strangers, perfectly comfortable!), and then in the end we decided to just take that bus to the next terminal rather than standing out in the freezing rain and cold for our usual bus choices.

Once at the terminal we stood inside a (warm, thankfully) shelter for what felt like eons, waiting for one of our buses to finally come. I’m pretty sure we saw every single bus on the Halifax side go by except one that would take us home.

Just when we were starting to give up any hope at all, a girl that we had met while sitting at the first terminal came running over, happy to see we were still there. She said she was fed up and was taking a cab home, and did we want to split the cost and go with her. It turned out she lives just up the street from me and my friend from work lives about two minutes past her so we immediately agreed, hopped in the taxi she had called, and I was home about five minutes later.

All in all, I finished work at 8:30 and got home at 10:05. Had we not taken the taxi I doubt we would have been home until at least 10:30. I have never been so happy to come home and change into flannel pajamas and a fuzzy robe.

Here’s hoping that tomorrow is a better weather and commuting day.