I’ve probably said this before but it bears mentioning again; I am extremely competitive. I love a good challenge and if I can win a game (or better yet, a prize!) I am all over that. I’m not a poor loser by any means, but I definitely really want to win everything I play and I will do whatever it takes to try to make that happen.

When one of my favourite fitness people, Bex of BexLife.com issued a 21-day plank challenge, it was pretty much impossible for me to say no. There was no way I was going to miss that. The basic rule was that you started on day one with whatever time you could get as you held a plank pose. Then every day you added five seconds. I started at 1:30 and by day 21 I was up to 3:10. That was all good enough, strengthening your core is a good enough reason to take on such an endeavour.

Then Bex mentioned prizes and people started posting photos of themselves and I, well, I lost my mind and started thinking up all kinds of crazy planking pictures. It even led to – gasp! – public planking! Here are some of my moments from my three weeks of ab-busting (a couple are missing because I didn’t get a photo). 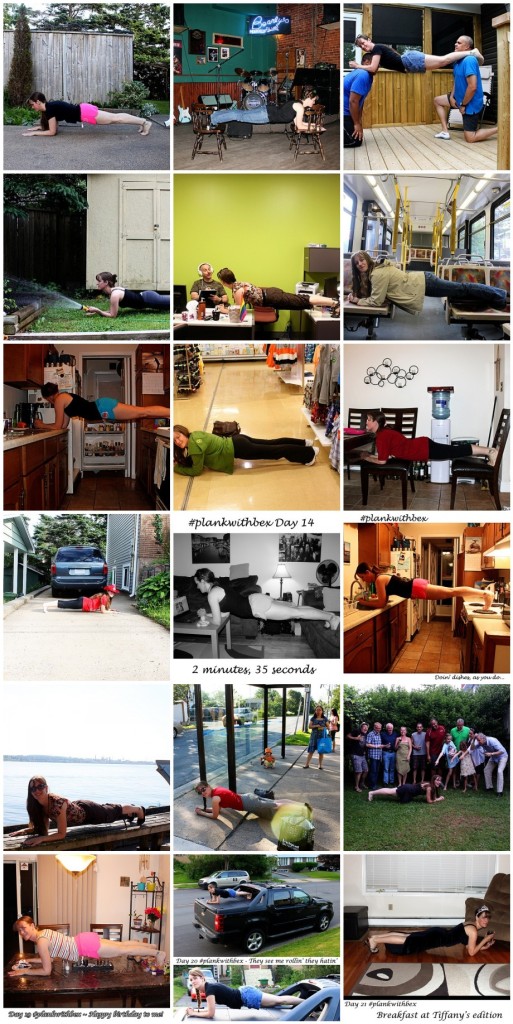 Row one: In my driveway, at Bearly’s House of Blues before George’s gig, on George and Les’ shoulders.
Row two: Watering my garden, chatting with my co-worker, on the bus (which is one of my FAVOURITES because it was way out of my comfort zone to ask the bus driver to take the picture!).
Row three: Looking for a snack, at the grocery store, waiting for supper with friends.
Row four: Happy Canada Day, reading up on the new semester of Social Academy, washing dishes.
Row five: By the waterfront, waiting for the bus, with my friends at my birthday party.
Row six: Blowing out the candle on my birthday cake, on the back of a truck, and last day was Breakfast at Tiffany’s edition!

You can click the image to see everything a little bigger or go to Flickr to see them individually.

And what did I learn from my challenge?

Well, for one, I learned that overall it gets easier to strengthen your core over time although in the higher numbers I would start shaking in the final 20-30 seconds. For another, I learned that I can plank more easily if I have a distraction like a television or someone to talk to (like when I talked to my friend Sue while we both planked in my living room together).

Best of all though, I learned to step outside of my comfort zone. It was most noticeable when I asked my bus driver to take the shot of me on the bus. That was terrifying and it took me three bus rides to work up the nerve. I said, as I climbed up on the seats, “I promise I’m not always this weird” and he replied, “I drive a bus. This is not the weirdest thing I’ve ever seen.”

That really resonated with me and I cared less and less. I tried to find a relatively quiet part of the grocery store to plank but didn’t care that much when a couple of people saw me. I set up my camera on my GorillaPod

and used the timer to snap the shot by the water and didn’t get embarrassed when a man walked by. And I laughed and blew it off when people were OBVIOUSLY watching as my friend took my picture as we waited for the bus.

How many times do we cringe and feel shy about doing something that might raise an eyebrow from someone else? The more I put myself in those situations the less it bothered me. The literal exercise was the core strengthening, but the best exercise in all of this was learning to let go of what strangers – or even friends and acquaintances! – thought might think of me.

Now THAT is liberating!