I will probably never be able to say that I love winter. I used to like it more when I was a teenager and cross-country skied. I learned how to ski downhill at one point too and I loved that as well but the chair lifts always scared the hell out of me and I missed cross-country trails.

I do know that making yourself have fun out in the snow and cold – even if it’s in the middle of a bit of a snow storm as it was yesterday – is a fine way to make the loooong winter season (yes, I *am* Canadian, we get a whole ton of winter) a little more bearable.

I do want to teach the kids to cross-country ski at some point, maybe starting with a rental before investing in any equipment of our own; I had some excellent skis, boots, and bindings but they were lost when my grandmother sold her house so I’ll have to start from scratch too. Still, my dad taught me when I was five on those big plastic skis and I loved it for well over a decade.

Yesterday was not the day for new beginnings though so we went sledding instead with one of our friends and his daughter. There’s a nice hill in a nearby park and because it’s not a HUGE hill it’s a) perfect for smaller kids and b) doesn’t have so many people that you need to line up to go down it. 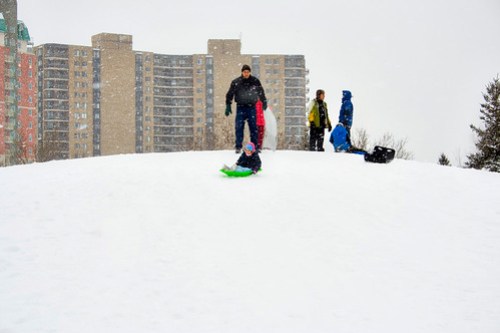 I was a bit apprehensive because the first (and last) time that Breanna went sledding she was utterly unimpressed. That’s actually putting it mildly. She hated it and lasted for two runs before she refused to sit on a sled ever again.That was two years ago though, so I was hopeful. 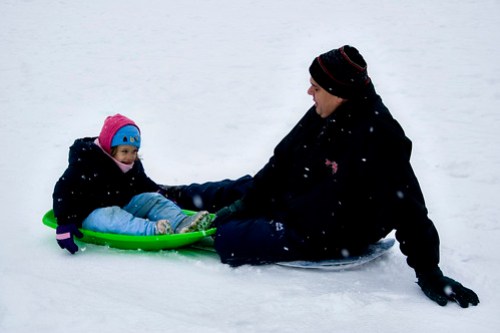 Yeah right. That kid LOVED sledding. Both Hayley and Breanna had a blast with their friend, and I must confess that the three adults had just as much fun. There’s not much else that can help you regain your youth like throwing yourself down a hill, shrieking like a loon. Well, regaining your youth until you realize you’re kind of achy later. But it was fun! 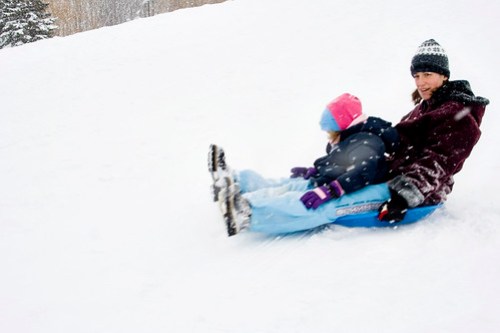 We only stayed for a little more than an hour because it was not only snowing, it was really windy as well, plus the kids got tired. Hayley and her friend went back to their place for the rest of the day and George, Breanna, and I stopped at his parents’ house for hot chocolate and warmth.

Like I said, I will never wake up and say, “holy crap, look at all that snow and ice, winter totally rocks!” Never. But at least days like yesterday make me remember that it can indeed be a fun season, especially when you’re a kid.

(See the full set of photos over here.)