Today we were planning to have some of George’s family over for supper so after brunch he and his sister took the kids out and ran some errands and did a bit of visiting. This left me all alone and I had just finished reading a book so I decided to fill my time with some yoga instead. I spent 45 minutes just doing whatever I felt like, not bothering with DVDs of YouTube videos, just running through sequences and poses including my rapidly improving Natarajasana or Dancer’s Pose. 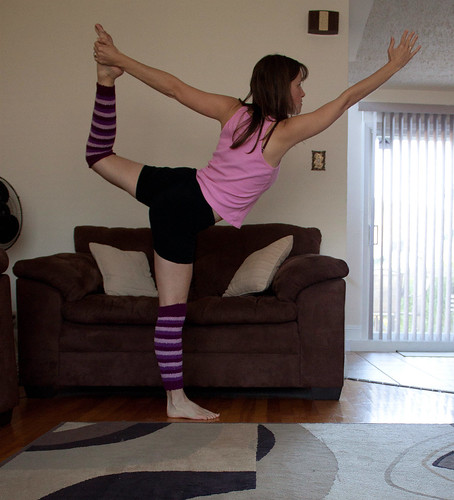 (Yes, I know, legwarmers. I wear them without apology for yoga but promise to not wear them out in public a la 80s.)

It turned out though, that what I left like doing was mostly inversions, and I have to tell you that if you learn to throw yourself upside down and balance you’ll feel strong enough to do just about anything. First off I discovered that my Full Wheel pose has improved. 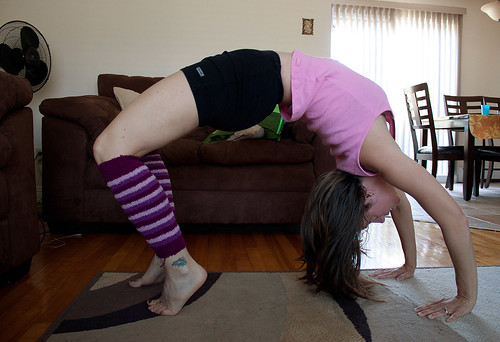 I haven’t even tried it in ages but I’ve been working on other poses that involve a bit of back bending and apparently my spine is gaining some flexibility. Seeing how well I can do this now compared to my early attempts has me wanting to do it more and more to really nail it down.

Then after playing with some fun variations of Side Crow pose… 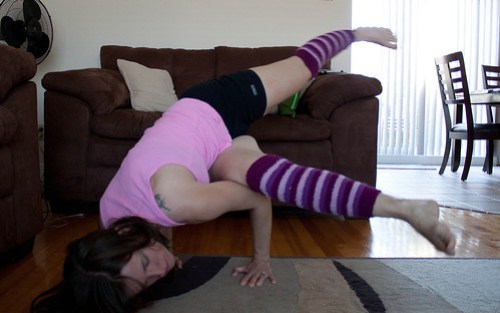 … I practiced Fallen Angel. It looks insane and impressive but if you can do Side Crow you can learn to do Fallen Angel. This is the first time I’ve ever gotten my legs this straight and it felt amazing. 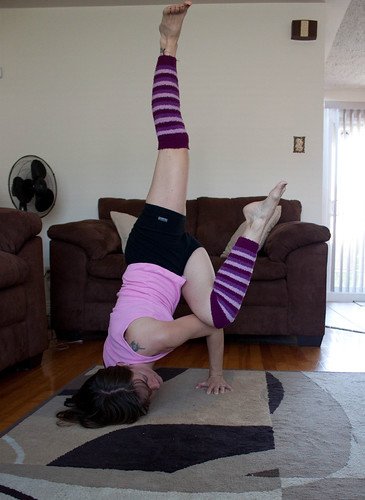 After finishing all my poses and routines I spent some time lying flat on my back in Savasana and marveling over how strong and relaxed I feel after doing yoga. I know that going in but it still takes my by surprise to experience just how powerful it is.

As a result I had plenty of energy to do a quick vacuum in the living room, made some fresh carrot-apple-celery-ginger juice for myself and my sister-in-law (who has now gotten me so eager to get a Vitamix that I could just about cry over how expensive there are, but ohhhh I want one!), shared cooking duties with George, and had a lovely evening.

I think it’s going to kick off my week quite nicely!