I’ve mentioned before, I think, that last year I was averaging about one zombie dream per week while I was actively watching season two of The Walking Dead. Interestingly, I don’t think I had ever had a single zombie dream in my whole life prior to watching the show, not even after watching occasional movies of that genre.

I should mention that the dreams have rarely been scary. They were occasionally tense but I never would have classified them as nightmares. Just high action dreams. 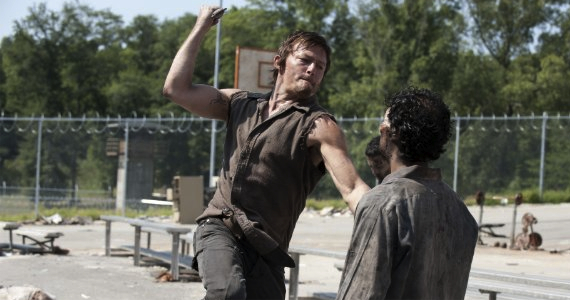 Last night though, or perhaps I should say early this morning, I had one that would have probably made an excellent episode if only I could remember all the details now.

I do know that perhaps predictably the majority of the characters of the show featured a role in my dream. I also remember things that should have clearly pointed out that I was dreaming because I would find part of my brain thinking, “wait, zombies don’t bite Rick!” or “wait, why are the kids sitting with Carl?” (and why is Carl in the house, he’s never in the house!) “Where the hell is Daryl and his crossbow?!”.

I also know that when my alarm went off at 7 I was in the middle of running for my life in my dream and when I opened my eyes and was in my bed in the still-semi-darkness – with no walker lurching towards me – my heart was POUNDING.

I knew it was a dream pretty quickly but it took me quite awhile to shake it off. I do not recommend kick starting your day (and your week) with a zombie nightmare that feels like it’s going on for days.